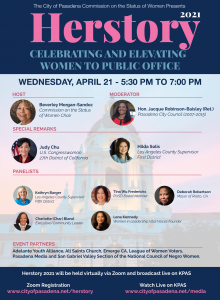 The City of Pasadena Commission on the Status of Women will host "Herstory 2021: Celebrating and Elevating Women to Public Office" on Wednesday, April 21, from 5:30-7 p.m. This virtual event will bring together women from throughout the community to discuss the status of women’s representation in civic leadership and how best to support women seeking and holding all levels of public office.

The program will feature a diverse roster of distinguished elected and community leaders. After special remarks from Congresswoman Judy Chu and Los Angeles County Supervisor Hilda Solis, a panel of local leaders will discuss their experiences and lessons learned as women in public office. Panelists include Los Angeles County Supervisor Kathryn Barger, Pasadena Unified School District (PUSD) board member Tina Wu Fredericks, Rialto Mayor Deborah Robertson, and community leader Charlotte (Char) Bland. The panel will be moderated by former Pasadena City Council member Jacque Robinson-Baisley, and Commission on the Status of Women Chair Beverley Morgan-Sandoz will serve as the host of the event.

Register now to attend the Herstory 2021 virtual event. The program will also be streamed live on KPAS at www.cityofpasadena.net/media.

Additionally, City of Pasadena employees will support Denim Day on Wednesday, April 28, 2021 by wearing jeans. The campaign was originally triggered by a ruling by the Italian Supreme Court where a rape conviction was overturned because the justices felt that since the victim was wearing tight jeans she must have helped her rapist remove them, thereby implying consent. The following day, the women in the Italian Parliament came to work wearing jeans in solidarity with the victim. Since then, wearing jeans on Denim Day has become a symbol of protest against erroneous and destructive attitudes about sexual assault. In this rape prevention education campaign, community members, elected officials, businesses and students are asked to make a social statement with their fashion by wearing jeans on Denim Day as a visible means of protest against the misconceptions that surround sexual assault.

“Denim Day, like Tarana Burke’s #MeToo movement, recognizes that awareness and understanding of sexual assault are key to overcoming stereotypes surrounding this form of violence against women. For it is force and power that are behind sexual assaults. It is not the way a woman dresses or walks or talks or looks. Women, all women of every color, race, nationality, religion are saying 'enough!' Denim Day symbolizes this unity of spirit and action,” says Commission on the Status of Women Chair Beverley Morgan-Sandoz.