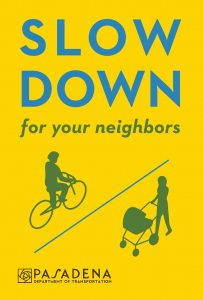 PASADENA, Calif.—Due to the Safer at Home Order, there are fewer cars on the roads potentially traveling at higher speeds and posing a risk to residents who have taken to walking, running, and biking to stay active. The City of Pasadena Department of Transportation (DOT) is implementing a number of strategies to enhance safety for all road users during the Safer at Home Order.

On April 28, DOT staff will begin placing signage at entrances to residential neighborhoods throughout the city reminding us all to slow down for neighbors who may be walking, running, or bicycling in streets in effort to maintain a safe social distance. Sign deployment will be completed citywide in May, and signs will be in place until the order is lifted and public parks and recreation centers reopen to the public. All local streets will remain open and accessible to traffic, since there remains a need for essential workers to get to and from work, deliveries to be made, and residents to make essential trips.

“Roughly 500 signs will be installed throughout the city, creating a network of over 100 miles of Slow Streets, and we’ll be relying on residents’ feedback to optimize placement of these signs,” said Laura Cornejo, director of transportation.

Additionally, starting April 29, traffic signal timing along 10 major corridors will be modified to operate in “nighttime mode,” also known as “free mode” operation, all day in an effort to reduce motorist speed and enhance safety. When intersections run in nighttime/free operation, traffic is served on a first-come, first-served principal. Select signals will remain red until traffic—whether it be a motorist pedestrian, or bicyclist—approaches the intersection. Once traffic approaches, the signal changes within seconds. Pairing the free operation with rest-in-red will require vehicles to slow down or stop at certain intersections. Modifications to the signal timing to free operation all day will be implemented along the following city corridors.

Following the implementation of free operation along these corridors, DOT will determine if this type of signal operation should be extended to other corridors around the city.

“This three-tiered campaign is a reminder that roads are multi-modal and are meant to be safely shared by all,” said Cornejo. “After it’s implemented, we’ll monitor and modify our efforts as needed.”