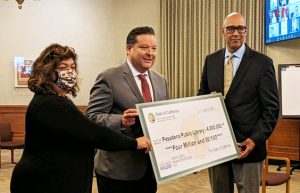 PASADENA, Calif.—On Sept. 27, 2021, at the start of the regularly scheduled City Council meeting, Assemblymember Chris Holden presented a check for $4 million to the City of Pasadena and Pasadena Public Library to help repair the nearly 100 year-old Central Library.

After a long closure of Pasadena Public Library facilities due to the pandemic, many looked forward to the reopening of the Central Library and its nine branch libraries. In April, the first to open was the Central Library. It was short lived as the City discovered that the building was not safe should there be an earthquake.

On May 3, 2021, City officials were forced to close Central Library for a required seismic retrofit and restoration to meet life safety requirements. A structural assessment revealed that most of the building consists of unreinforced masonry.

The City moved to work towards identifying a plan for seismic upgrades, restoration, and reopening of the facility. The City reached out to Assemblymember Holden. Just one month later, it was announced that the State of California had approved in its budget $4 million to be used for the design and drawings for the seismic upgrades of the Pasadena Central Library.

At the City Council meeting, Assemblymember Holden said, “Having served on this council, I understand first-hand how important this library is to the community.”

In the previous year, prior to the pandemic closure, Pasadena Public Library greeted over 616,000 guests, with the Pasadena Central Library hosting 232 group events and 876 community and organization meetings.

City officials praised Assemblymember Holden for his work not only as their representative in Sacramento but also for his commitment to the community that he has represented for decades.

With these initial funds now secured, the City will assemble and manage an architectural engineering design team of experts that will bring the iconic Central Library back online to ensure access to library services and programs for future generations, and to preserve the historical features of the Central Library building.

For more information on the Central Library, please visit www.PasadenaPublicLibrary.net.