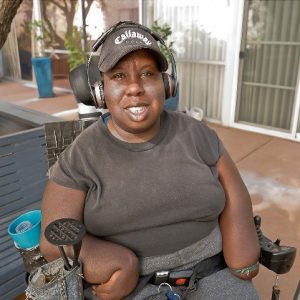 PASADENA, Calif.—The City of Pasadena is proud to recognize Zebreda Dunham as the 2022 recipient of the Robert Gorski Access Award—an award established by the City’s Accessibility and Disability Commission and presented annually to a Pasadena resident with a disability who has made a significant contribution toward improving accessibility and quality of life for people with disabilities. Zebreda will be honored at the Monday, July 25, City Council meeting.

Zebreda was born in 1978 with Arthrogryposis Multiplex Congenita (AMC). The symptoms of AMC are physical and can differ greatly in range and severity from one person to another. Typically, individuals with AMC have joint stiffness that affects the range of motion of their legs and arms.

Zebreda’s life has been filled with both extraordinary challenges and achievements. She moved to Pasadena in 2005 and has been a familiar face throughout the city ever since. A self-described “MacGyver,” Zebreda is well-known for her work designing, creating, modifying and adapting a wide range of tools, equipment and devices that support activities of daily living, many of which can be viewed on her YouTube channel, Zebreda Makes It Work! Her work enjoys an international following of persons with disabilities, assistive technology specialists, designers, engineers and service providers working on accessibility-related products ranging from simple DIY tools to high-tech interfaces. Zebreda has participated in projects hosted by both Google and Apple, and was the first recipient of RESNA's Do-It-Yourself Assistive Technology Contest for her modification of a key turner. In 2015, she was invited to virtually present at the Enable Makeathon hosted in Bangalore, India.

Always with a smile and positive attitude, Zebreda has made Pasadena a more inclusive and welcoming city. Over the last few years, she has helped the City’s Accessibility and Disability Commission initiate Pasadena’s annual Adaptive Sports Festival and integrate accessible features into the Union Street Protected Bike Lane Project.

Zebreda is also an avid sports enthusiast and member of the SoCal Vaqueros Power Soccer Club. She encourages others throughout Southern California to compete in adaptive sports. Learn more about Zebreda.