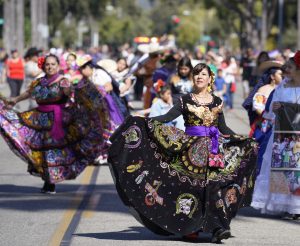 The parade and festival have showcased Latino history and culture through its mission to promote and provide educational cultural programs to Pasadena residents and surrounding cities. This year’s theme, "De Colores // An Array of Colors," recognizes the rich diversity in the Latino culture and promises to enrich the community by bringing together family and friends, warmth and culture, as well as values and tradition.

More than 2,000 participants and spectators are expected to attend the parade and festival. The parade begins at 10 a.m. at Los Robles Avenue and Prescott Street, heads south on Los Robles and ends at Villa Parke Community Center, 363 E. Villa St. Immediately following the parade, the festival will feature live entertainment by local groups and headliner La Sonora Dinamita with Vilma Diaz, educational booths, free activities for children, and food available for purchase.

The parade’s grand marshal is Liliana Pérez, cultural affairs director for the Los Angeles Chargers, and the community grand marshal is Yoland Trevino, founder and executive director of Pasadena/Altadena Coalition of Transformative Leaders (PACTL). Pérez’s role with the Chargers involves building strategic partnerships within California's dynamic and versatile economic, cultural and social sectors. Prior to joining the Chargers, Pérez worked in the public sector, holding senior leadership roles in the offices of six speakers of the California Assembly, including then-Speaker Emeritus of the California Assembly, Antonio R. Villaraigosa. She has been recognized for her advocacy work on behalf of marginalized populations including the LGBTQ community, immigrants and women. Pérez remains passionate about social justice and civil rights causes, and is active with numerous organizations. Born in Guadalajara, Mexico, Pérez immigrated to Los Angeles in 1971 and attended California State University, Northridge. A true Angelina, Pérez enjoys the city's culturally-rich food offerings and social events, as well as spending time with her mother, partner and three rescue fur babies.

Community Grand Marshal Yoland Trevino has been recognized nationally and internationally for her innovative programs. She developed a community-based mental health model comprised of mental health professionals who engaged natural community leaders and trained them to become paraprofessionals. She has served on many educational committees, including the Clinton Administration’s Domestic Policy Council. After working in education, health psychology, family support, and community development for 25 years, Mrs. Trevino founded Transformative Collaborations International (TCI). In addition, she is the former global council chair of the United Religions Initiative, an organization in more than 78 countries. She holds two masters degrees from Pacific Oaks College, one in human behavior and one in psychology. Mrs. Trevino was born in Guatemala and immigrated to the United States as a child in 1966. She is a married mother of two adult professionals, and a grandmother to two college students.

"We are excited to host the 24th annual Latino Heritage Parade and Festival in person after two years of virtual activities! We invite the community to bring your family and friends and join us in this marvelous celebration,” said Brenda Harvey-Williams, director of Pasadena’s Parks, Recreation and Community Services Department.

The following streets will be closed for the parade and festival during the times listed below. Motorists are advised to use caution while driving through the area:

Pasadena Media will record the parade in its entirety, and it will air on both KPAS, the City government TV channel, and Arroyo, Pasadena's public access channel. Visit www.pasadenamedia.tv for broadcast times.