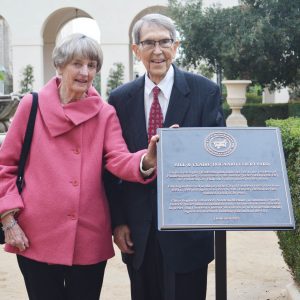 PASADENA, Calif.—At their May 2, 2022, meeting, the Pasadena City Council approved the renaming of the Pasadena City Hall Courtyard in honor of Bill and Claire Bogaard. For their exemplary leadership and public service to the residents of Pasadena and their commitment to the historic preservation of the city, the City Hall Courtyard was dedicated in their honor on Dec. 4. A bronze plaque was installed within the courtyard commemorating the occasion.

"Bill and Claire Bogaard are in a league of their own. Their dedication and service to their community is singular and inspirational," stated Mayor Victor M. Gordo. "Mayor Bogaard, in particular, has served as a role model and mentor to many, including myself. I am proud to call Mayor Bogaard and Claire friends and privileged to have the opportunity to dedicate this historic courtyard in their honor."

The Bogaards' work in support of improving the quality of life and ensuring the historic preservation of Pasadena have helped to define Pasadena as it is known today. For over 40 years, the Bogaards have helped to shape Pasadena as one of the nation’s leading cities, a city that is internationally recognized for its culture, arts, education, science, jobs and economic opportunity.

Bill and Claire Bogaard moved to Pasadena in the early 1970s. Shortly after their arrival to the city, Bill launched a successful bid to represent District 6 on the Pasadena Board of Directors. Bill Bogaard served on the Pasadena Board of Directors from 1978-86, during which time he served as rotating mayor from 1984-86. In 1999, Bill Bogaard became the city’s first directly elected mayor and served in that role until 2015. During his tenure, the city ushered in the arrival of the Metro Gold Line light rail transit system, made significant new investment in housing, completed the construction of the new convention center, and invested hundreds of millions of dollars into the city’s neighborhoods to create better roads, bridges, schools, parks and city services which enriched the lives of Pasadenans. Bill Bogaard’s official public service spanned a total of 24 years, 18 of which were served as mayor. Since leaving office, he has continued to support the community through a number of appointments to advisory boards, task forces and nonprofits.

Claire Bogaard, the former First Lady of Pasadena, equally made her mark on the city. Given her passion for historic preservation, Ms. Bogaard helped to shape and preserve the Pasadena that exists today. A founding member of Pasadena Heritage, a community-based historic preservation association, Claire and her colleagues were instrumental in preserving Pasadena’s historic downtown at a time when it was contemplated that it be raised and replaced with high-rise development. In addition to her work with Pasadena Heritage, Claire Bogaard has served on the board of West Pasadena Residents Association—the City’s oldest and largest neighborhood association—and as an advisor to the National Trust of Historic Preservation, California State Historic Commission, and other City commissions and advisory committees, including the Committee for the Restoration of Pasadena City Hall.

"Bill and Claire Bogaard are exemplary civic leaders. Bill’s long-running service as an elected—including an unprecedented 18 years as mayor—and Claire’s contributions to historic preservation and planning have helped make Pasadena a world-class city for all," said current District 6 Councilmember Steve Madison, who for several years led the effort to honor the Bogaards and moved the council’s renaming action earlier this year. “So much of Bill’s work occurred inside City Hall, and so much of Claire’s work preserved sacred icons like City Hall. The council’s decision to rename the courtyard at Pasadena’s historic City Hall for this remarkable couple is a fitting and appropriate tribute given their monumental contributions to this great City.”

Bill and Claire have been married for 61 years and have four children and eight grandchildren with whom they enjoy spending time.