Detective Zilbert collaborated with Detective David Torres and Detective Hector Salas of the Los Angeles Police Department, Northeast Division. Detectives believe the suspects are responsible for at least 10 commercial burglaries that occurred on the morning of January 5 along Colorado Boulevard in the Eagle Rock area of Los Angeles and Northwest Pasadena.

On Thursday, January 24, the Los Angeles County District Attorney’s Office filed 10 counts of second-degree commercial burglary against both Morales and Sowell. The arraignment for both suspects was held on Thursday, January 24. Morales’ bail has been set at $200,000, and Sowell’s bail has been set at $100,000. Their preliminary hearing has been set for March 3. No additional information is being released at this time since the police investigation is ongoing.

The Pasadena Police Department is seeking the public’s help in identifying a third commercial burglary suspect. See image below.

Anyone with information about this case is encouraged to call Detective Kourtney Zilbert, Pasadena Police, at (626) 744-3862. To provide information anonymously, call “Crime Stoppers” by dialing (800) 222-TIPS (8477); or report via your smartphone by downloading the “P3 Tips” mobile app on Google Play or the Apple App Store, or by using the website lacrimestoppers.org. 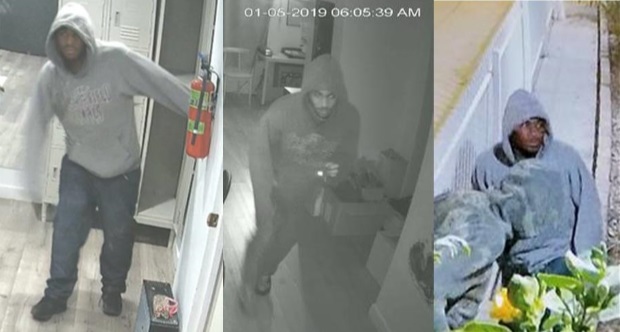