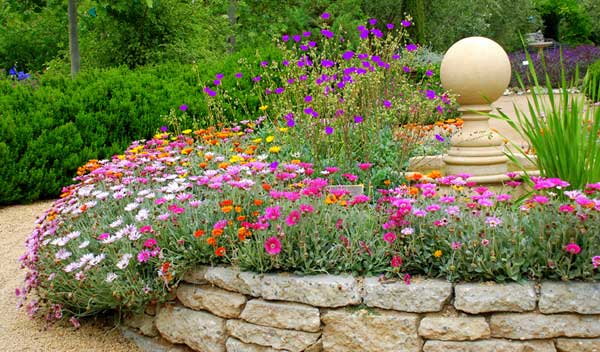 Thousands drive by Arlington Garden each day on busy South Pasadena Avenue and see a pleasant landscape. While those who stop for a moment see much more, those who stay a little longer discover surprises around every corner.

Today, the garden is home to 350 trees and thousands of plants that thrive in our mediterranean climate, but it wasn’t always so. From 1904 to 1964, the 10-acre site was home to the renowned Durand estate. The 17,000 square foot 50-room mansion was surrounded by stunning gardens and a perimiter of Cherokee roses. Then, in 1964, after the mansion had fallen into disrepair and the gardens gone fallow, Caltrans purchased the lot to store heavy equipment during construction of the planned 710 freeway expansion.
Until 2002, the only attention it got was a twice a year mowing by Caltrans. And the only suggestion of its former glory could be found in two coast live oaks, a California pepper, a jacaranda and seven palms. A temporary use had become a permanent eyesore. Worse, the blight extended to Arlington Drive, which bore just two barely surviving magnolia street trees, empty motor oil cans and fast-food wrappers.

In 2002 District 6 Councilmember Steve Madison decided something had to be done. He asked neighbors what they would like the site to become if the City were to lease it from Caltrans. The response was anything with low community impact — no playing fields, on-site parking, lights, or public restrooms. Now that he knew what not to do, all that was left was to figure out what to do.
This was also a time of changing attitudes regarding land use and landscaping. Waterwise and drought tolerant were new concepts. Land was expensive, the City’s water supply limited and its resources already stretched thin. It soon became clear it would not be a traditional city park. The old way of doing things faced a new reality.
Steve turned to us for suggestions. We had just moved next door to the site and were dismayed at what an eyesore it was. One Sunday morning in 2003, Betty looked out our window and announced that the site should become a garden.

There was no clear model for how to get here from there. Location, events, personalities, levels of interest and finances made it difficult to follow a straight path. We knew, however, that we needed a champion. Fortunately, we had one in Steve. We also needed a City administrator with the willingness to see beyond the status quo. We had one in former City Manager Cynthia Kurtz. Last, but certainly not least, we needed the City Council’s willingness and commitment to sign a lease with Caltrans for the lot. They did, and suddenly the pieces had come together, we were on our way.
The first Garden committee included both of us, Cathy Woods, Director of the City’s Parks and Natural Resources Division, Steve’s Field Representative Taka Suzuki, and Pasadena Water & Power’s water conservation manager Nancy Long. We told City landscape architect Todd Holmes, who had just redesigned Singer Park, that we saw this as a garden, not a park. He pointed us toward Cal-Poly Pomona’s landscape-design students, who developed the first marvelous concept designs for our garden.
We found our garden designer at a book signing at Vroman’s. Author Jan Smithen, who had just published Sun Drenched Gardens, the Mediterranean Style, recommended we contact Mayita Dinos, one of her former students.

It takes a village

A mix of emotions

The development of Arlington Garden was nothing short of a miraculous confluence of vision, hard work, persistence and time. Over the years, the Garden has given us much pleasure and only a little disappointment. We recall moving our first public meeting to a neighbor’s garage in a driving rainstorm, and planting street trees one Saturday, with Pasadena Beautiful’s generous help, in a similar deluge. We recall the stunning brilliance of the Garden’s first growth of California poppies, and we still marvel at our now mature volunteer oaks, sycamores and olive trees that sprung from the ground.
On the other hand, we lost the beautiful mature olive tree Westridge School donated to the Garden, and we’ve occassionally had to remove trees we’d grown fond of because they were “competing” with neighboring trees. The Garden has also been victim of a very occasional theft of equipment, materials and some special plants.
But most of all, we are proud that we have done what we said we would do: create a sustainable water conserving public garden in harmony with our mediterranean climate. Each day we enjoy seeing returning and first time visitors to the Garden and exchanging waves from people passing by. And we are grateful and humbled how neighbors, families, and professionals have embraced and adopted Arlington Garden.

A garden for the generations

We hope that the City and our friends and neighbors will come by often and continue to help us ensure that Arlington Garden remains a lasting part of Pasadena’s landscape.
PS: You can help the cause by purchasing the sweet orange marmalade we make from our own orange trees. To order some, visit our website at arlingtongardeninpasadena.org or call 626 441-4478.
Written By Charles “Kicker” and Betty McKenney
The Constant Gardeners