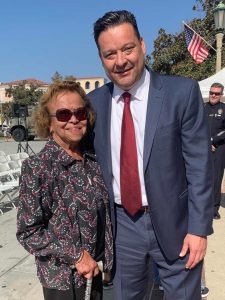 Our City lost a bright light yesterday evening with the passing of Dolores Hickambottom.

I know that all of Pasadena joins me in mourning the loss of Dolores Hickambottom who for so many decades guided our community with dignity, respect, and a kind and loving manner.  Dolores was a friend and mother figure to all of Pasadena.

In words written about Dolores over the next few days, her work as a champion of women’s and civil rights for well over 50 years in our community, will be a hallmark. Still, for many of us, Dolores has been so special above and beyond her daily work.

She along with her husband Elbie, who served on the PUSD Board of Education, were instrumental in the fight to integrate our public schools and in the continued fight to ensure a just and equitable education for all our PUSD students. Dolores helped establish the Pasadena Educational Foundation, focusing its efforts on improving the educational outcomes for our most disadvantaged students. She worked to elect Loretta Glickman, a teacher in Pasadena Unified, to the Pasadena Board of Directors and later served as her Field Representative. Mrs. Glickman later became our City’s first African American Mayor, building an important connection between City Hall and our residents in northwest Pasadena.

According to Dolores, her foundation for activism in Pasadena began when her children entered elementary school. “The PTA was the beginning of my social activism, if you will, having four children in the schools.” While starting her activism locally, Dolores went on later to serve on the staffs of State Senators Walter Stiern, Richard Polanco and Jack Scott. Her humility always on display, Dolores said upon recently receiving a lifetime achievement award, “I have no qualities that make me stand out, but I may have a special purpose of being where I was meant to be at a given time, . . .I am grateful for the opportunity to be of service in small ways.” Apart from all this work, we must remind ourselves at this time of her infectious smile and warm embrace which also were hallmarks of how she supported us while we worked with her.

While her community work is monumental, anyone who worked alongside Dolores knew about her family because family was at the heart of that work. Dolores always highlighted the joys and challenges of being mother to Ann-Marie, Skip, Leslie and John. While our community lost a dedicated champion and civil rights activist, her children, though now adults, lost their dedicated and doting mother. Dolores’ legacy will live on through them and their commitment to our community, and all of us in the City of Roses will stand taller as we remember the excellent foundation for our steps that is Dolores Hickambottom.

Please join me in thanking the Hickambottom family for having allowed Dolores to do so much good for our great City.