While there are lots of exciting and positive things happening in Pasadena: new projects, new Department Heads, new initiatives–I am not going to review them tonight, but they are described in various City publications. There are also lots of challenges: hiring a new City Manager, proposals related to the Rose Bowl, Police oversight, minimum wage, recycled water–also not on tonight’s agenda, but all to be discussed in detail at upcoming City Council meetings.

Instead, tonight will be devoted to the City’s Finances. Why?

First, the City Charter provision passed by the voters in 1998 requires that in January of each year, the Mayor present a thematic budget message for the stated purpose of receiving and considering public suggestions and comments on the City budget prior to its preparation and ultimate approval by the City Council. My speech tonight begins a new tradition of focusing on the City’s budget priorities as required by our Charter.

Second, the Citizen Task Force on the embezzlement emphasized that we must upgrade citizen awareness and oversight of our finances, in part because a better informed public could help prevent recurrence.

Third, everything that the City undertakes depends upon our available resources.

So tonight I’m going to review the basics of Pasadena’s finances in about 15 minutes, using 9 graphics. You will see that we don’t have much control over revenue growth and that our spending choices have serious constraints. But the decisions we make together profoundly impact every aspect of life in Pasadena.

This presentation will be available online later this week; so you don’t have to take notes. BUT, there will be a voluntary, 8 question quiz at the end. Everyone that scores >75 will be eligible for a prize drawing & will be invited to a Budget discussion with me, the City Manager & the Finance Director.

After my presentation, we will have a short Q&A on any subject. Then we will collect your answers, any written questions & my colleagues on the City Council will be available to answer any other questions. That’s the plan for this evening.

So where does the money come from to run our City? All of our charts tonight will exclude the Department of Water & Power, because the numbers from our municipal utility are self-sustaining and dwarf the rest of the Budget.

The four biggest individual sources which account for more than half of that Revenue:

Chart B tracks these four sources going back to 2008. 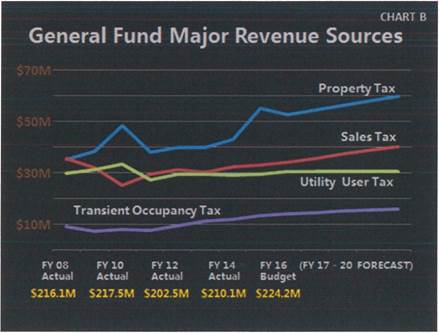 The interesting thing about these trends is that in 2008, Property and Sales Taxes were essentially equal at $34M. Since then, Sales Taxes have remained about the same, while Property Taxes have grown by 56%. Utility Users Tax is flat even though utility rates have risen because utility demand is down, especially for landline telephones and cable services.

Transient Occupancy Tax is growing due to the growth of our hospitality industry, but still remains a much smaller source than the others. Also, 60% is already committed to the Convention Center.

The conclusion of all this is that increased development and rising property values will continue to be our primary source of revenue, and that the City has no likely method of bending these Revenue curves upward in any significant way.

Now let’s take a look at how we spend our money. Chart C is a pie chart, which shows by Department how we spent the revenue we just collected.

Said another way, Chart D depicts what these departments cost per person, per month:

So Police services cost each of us $39/mo. Libraries cost $6/mo. All General fund services, the entire City Government, costs each of us $130/per month. Sound like a lot? Or is it a bargain?

More than half of that total is spent on Public Safety–our Police and Fire Departments. Chart E shows that these costs have been growing. Public Safety consumed 46.2% of the General Fund Budget in 2008; that has now grown to 53.5%. Is that worrisome? Appropriate? Inevitable? An additional police officer costs $166K/yr.

What other items are taking a growing bite out of our budget? One of the most talked about is the City’s contribution to Reitrement-CalPERS. Chart F shows that the budget payments have actually been remarkably stable from 2011-2015.

Although our rates have soared, the increase has been offset by increased City employee contributions, so our cost during this time held in the lower $30M range. This year, it climbs to $39M; four years out, the forecast is a whopping $65M; a 100% increase in five years!

Another oft-discussed item is the City’s debt; our borrowing. Although we have a Triple A Bond Rating, the Rating agencies have dinged us for having a high Debt load. We have issued pension obligation bonds and undertaken significant capital projects, like renovating City Hall ($119M), the Rose Bowl ($182M), and the Convention Center ($162M). All of these are ultimately guaranteed by the full faith and credit of the City’s General Fund.

In looking at our debt per capita and comparing it with other mid-sized cities, the dotted line on Chart G includes the Rose Bowl and Convention Center, which should continue to be self-supporting. But even without those two projects, Pasadena’s debt is 10 times that of Burbank. While the curve is declining, this high load constrains our ability to borrow.

While we have undertaken some highly visible public projects, how have we done on Capital Improvement projects that maintain our infrastructure – the less glamorous projects that represent how much we are willing to invest in our future, like sidewalk repair, fire station upgrades, improving our parks? Here the picture is mixed.

Chart H shows that our annual funding for non-utility capital spending has had decided ups and downs, ranging from $36.3M to $13.2M. One constant has been that the list of approved, but unfunded projects in our 5-year CIP has been approximately $350M.

Finally, what does our savings account look like? How is Pasadena saving for a rainy day? Chart I shows that in 2008, our total reserves were approximately $46M. Then, during the “Great Recession” of 2008-2012, we drew down various reserves by $25M in order to maintain services. Since then, we have been rebuilding our rainy day fund so that it is almost back to pre-recession levels.

Thank you for listening so attentively to all of this. We now have a common information base to begin the budget discussions that will take place in April & May. I will be interested to learn what questions these facts raise in your mind. I know some of the answers I would like:

I hope that this has been useful for you. If not, blame me because tonight’s theme was entirely my doing. However, I must thank those who helped put it together. Special thanks to McKinley, its Principal Dr. Charles R. Heaton, students & faculty. You should know that McKinley has launched a campaign to restore the historic Frank Chamberlin mural in the Library & I hope you will help.