Thanks Gene. Welcome to this beautiful new joint use facility which is a product of the cooperation between PUSD & the City.  First let me say that is a privilege to serve as your Mayor, and I appreciate your attendance tonight.  I also appreciate my wife Maria’s presence as well as my son Joshua & his family.

Last year I devoted the entire State of the City to finances.  This year I will devote some time to finance, but I will also discuss a related topic which is one of the most controversial & least understood subjects confronting our City – new DEVELOPMENT. And finally, I will talk about a new initiative related to the ARROYO SECO. All three topics relate to keeping Pasadena’s future bright.

The City Charter provision passed by the voters in 1998 requires that in January of each year, the Mayor present a thematic budget message for the stated purpose of receiving and considering public suggestions and comments on the City budget prior to its preparation and ultimate approval by the City Council.  Tonight continues our new tradition of focusing on the City’s budget priorities as required by our Charter.

Last year I reviewed the basics of Pasadena’s finances, demonstrated that we don’t have much control over Revenue growth & that our spending choices have serious constraints. Here’s a summary refresher: 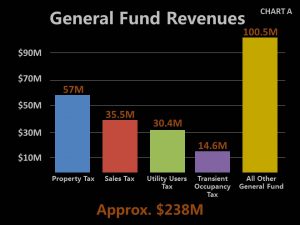 CHART A shows that Our General Fund Revenues are approximately $238million.

The 4 biggest individual sources which account for more than half of that Revenue remain:

Increased development & rising property values will continue to be our primary source of revenue. 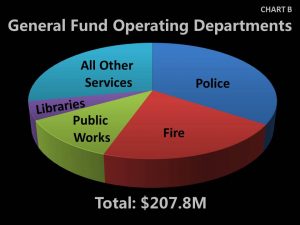 CHART B is a pie chart which shows, by Department how we spend the Revenue we collect.

An additional $30.2M, not shown, is non-departmental, like bond debt payments.

The City’s contribution to the employee Retirement system –CalPERS continues to take a growing bite out of our Budget. 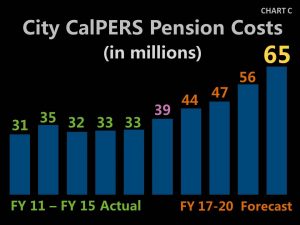 CHART C shows that the budget payments to CalPers have actually been remarkably stable from 2011-2015.

Although our rates have soared, the increase has been offset by increased City employee contributions; so our Budget cost during this time held in the lower $30M range. Last year, it climbed to $39M; 4 years out, the forecast is a whopping $65M; a 100% increase in 5 years! And based upon recent CalPers actions, the number will get even worse.

There is however some good news regarding our RESERVES; our savings account. 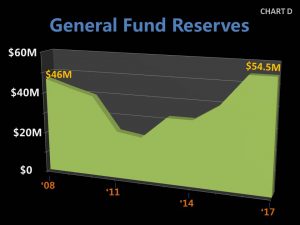 CHART D shows that in 2008, our total reserves were approx. $46M.  Then, during the “Great Recession” of 2008-2012, we drew down various Reserves by $25M in order to maintain services.  Since then, we have been rebuilding our rainy day fund so that it is almost back to pre-recession levels.  We have accomplished this by adding savings generated by one time payments & the elimination of some staff positions.

Still, looking ahead, if we continue on our current pattern of INCOME & EXPENSES, we will find ourselves in a DEFECIT position during Fiscal Year 2018 which begins this July. 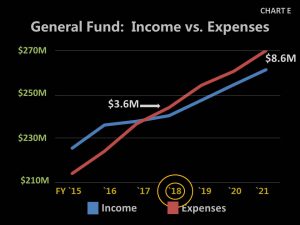 CHART E shows that Expenses will begin to outstrip INCOME by $3.6M in FY18, more than doubling to $8.6M within 4 YEARS. My primary message to you tonight is that this is not an acceptable outcome. So we must continue to work hard to enhance INCOME & to reduce EXPENSES.

On the EXPENSE side we have already implemented the relatively obvious savings. Since more than 70% of our Budget is spent on personnel & since we must pay our employees a competitive wage, the inevitable conclusion is that we cannot support the existing payroll of 2,200 employees indefinitely. Further, if we are to maintain high quality services, personnel reductions will mean eliminating some programs altogether.  And since every program has a constituency, this will not be a popular effort.

We must use the Budget process in April & May as a comprehensive & collaborative review to determine what programs can be shifted to other funding sources or which activities are no longer necessary. We must make structural changes now so that we don’t spend more than we collect.

The biggest positive contributor to the Income side of the equation is new development. Yet it is precisely this activity that provokes some of the most intense disagreements in our City. How much new development should we allow? Where should it be located? What should it look like? How will we manage the traffic that it generates? How will we supply the water? This  debate rages even after several General Plan cycles which took great pains to include public input & to consider these very questions.

To try & shed some light on this, I thought I would share the following information:

Here are some useful facts:

Southern California will continue to grow; as long as we have children & grandchildren. And while water is a growing concern on a regional level, it is far more efficient to meet the region’s growing population in developed areas like Pasadena than to build in undeveloped areas which would require brand new infrastructure. Moreover, due to conservation & more water-efficient code requirements, our water use has declined from 226 gallons/day/person in 1997 to 148 gallons/day/person today.  Pasadena’s total water consumption in absolute terms, in 2015, was the lowest that it has been since 1952 in spite of our modestly growing population.

As for traffic, as the downtown area grows more dense, the old suburban auto-dependent travel patterns no longer apply because the residents rely less on their cars. Instead they walk, bike or take advantage of Uber & Zipcars. This trend is accelerating in cities around the world & yes, also in Pasadena.  Interestingly, despite the City’s modest population growth and increase in new development, average travel time on our major arterial streets has seen only a slight increase since 2006 & is actually DOWN in some cases. 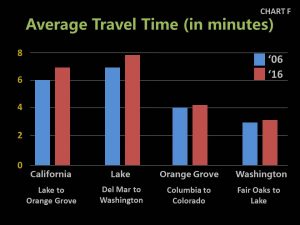 CHART F is an example of some trips that take slightly longer than they did 10 years ago:

I know that the 210 is clogged & there is some street congestion, particularly in the afternoon peak, but Pasadena is not approaching gridlock or even West LA traffic levels.  For even more detailed information, the City’s Annual Transportation Report Card will be available on the City’s Department of Transportation webpage this Spring.

So what are these new developments which are causing so much consternation?  Some are large, like the 5 story buildings on Walnut downtown.  But most are more modest; like these:

Cordova/Oakland:  This new development replaced a single family home on an arterial street, across from the Hilton Hotel & adjacent to existing multi-family buildings with 21 apartments. Real estate taxes will go from $17,000 to $150,000 which will generate an additional $28,000/year to the City. The project paid $470,000 in fees & will accommodate 30-40 additional residents who can walk to downtown attractions, but who may also own 20-30 additional cars.

These increases in density are only occurring in specified areas that are planned for multi-family housing. They do not threaten the 75% of the City that is not zoned to permit multi-family or commercial development. But they will upgrade the housing stock, support businesses & allow our city to accept its fair share of regional growth.

So, some fair conclusions about new development:  Our rate of growth is NOT explosive nor out of line with the region; most of the City is protected from significant change; our infrastructure can handle the growth that is allowed by the General Plan.  Still, we must continue to carefully review what is actually happening & strive to find a balance that will allow our City to grow & change without losing the essence of what we love about Pasadena.

So far I have presented lots of information about challenging, sometimes contentious subjects.  I want to close with an equally challenging but more aspirational subject.

The Arroyo Seco is our most precious & distinctive natural resource.  It offers a staggering array of recreational activities & many of us know it only for the particular activity that we personally enjoy, which may include: Disc golf, swimming, childrens’ playgrounds, soccer, archery, flea market, hiking, bird watching, flycasting, college football, entertainment, golf, charity walks, company picnics…the list goes on & on.

But there are plans being made by outside agencies that could dramatically change the entire Arroyo Seco.

The County Dept. of Public Works has a gigantic sediment removal plan in Hahahmongna.  The National Park Service is proposing to add the Arroyo to the Santa Monica Mountains National Recreation Area.  The Army Corps of Engineers has a habitat restoration study underway that could remove much of the concrete flood control channel.

At the same time, the City has developed multiple, segmented Master Plans for the Arroyo . While we have invested $200M to enhance the Rose Bowl & ensure its future viability, we have more than $80M worth of unfunded projects in the rest of the Arroyo.  Also, while golf is declining nationally, the Brookside Clubhouse is in need of a significant overhaul.

With all of these issues swirling around, the administration of this key resource is divided between various City agencies, departments, commissions & operating companies.  During 2017, the City Council will work with the City Manager’s Office, the Rose Bowl Operating Company & residents citywide to step back & consider the entire Arroyo Seco in a comprehensive way.  Not just as a site for a huge variety of user-driven functions, but as the living, beautiful, natural heart of our City.  We will study best practices from other cities, activate new levels of citizen participation, explore how we can better spend City resources, & attract additional resources to invest in the future of the Arroyo Seco. Watch for it.

All of the themes that I have touched on tonight are designed to strengthen Pasadena’s future.

With your continued interest, stabilizing our finances, accommodating an appropriate level of new development & imagining a renewed future for the Arroyo Seco will all contribute to a stronger & even MORE beautiful Pasadena.

I really hope that this evening has been useful for you & I must thank those who helped put it together.  Special thanks to Washington School, its Principal Shannon Malone, students & faculty; from the Office of the Mayor & City Council: Rhonda Stone & Jana Stewart; Pasadena Media’s Chris Miller, Bobbie Ferguson and Danny Hesse; Public Information Officer William Boyer; from the Department of Human Services:  Horace Wormely, Kenneth Graham and Dolores Mendoza; our Public Health Department; Police Explorers; Northwest Program Ambassadors; and our City Manager Steve Mermell.