Thanks Tyron; we all appreciate your service as Vice Mayor and as a proud Mustang.  Welcome to this beautiful facility and our thanks to the PUSD for letting us showcase another of its completed Prop TT projects.

It is a continuing privilege to serve as your Mayor, and I appreciate your attendance tonight.  I also appreciate my family’s presence.

The City Charter requires that in January of each year, the Mayor present a thematic budget message for the stated purpose of receiving and considering public suggestions and comments on the City budget prior to its preparation and ultimate approval by the City Council.  So, for the past four years I have devoted most of my State of the City speech to our finances.

I have provided our residents with a background on how we pay for City services, alerted everyone that the day was approaching when we could not rely on our sources of revenue to adequately pay our bills, and therefore proposed a 0.75% SALES TAX increase to the voters. Measures I & J—which passed overwhelmingly in November, 2018 allowed us to maintain City services without cuts and begin to invest in our infrastructure.

Tonight, I want to continue the process by looking ahead even longer term and discussing alternative spending strategies to keep our City strong. 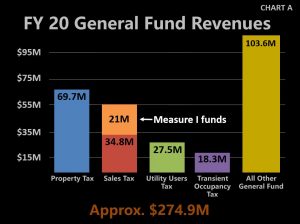 As a refresher, CHART A shows that our current FY2019 General Fund Revenues are approximately $275M; up from $245M last year.

The four biggest individual sources which account for more than half of that Revenue remain:

New development and rising property values will continue to be our primary source of revenue and revenue gains. 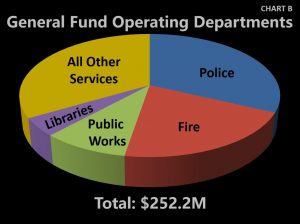 CHART B shows, by Department how we spend the Revenue we collect.  An additional $30M, not shown, is non-departmental, like bond debt payments.

The big four as you can see are: 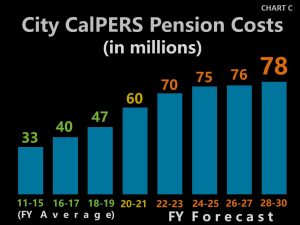 The City’s contribution to the employee Retirement system—CalPERS—continues to take a growing bite out of our Budget and has received a lot of attention.  CHART C shows the progression from $33M in 2011 to $78M in 2030. Viewed another way, this year, General Fund payments to Calpers will be 11.9% of the General Fund Budget. This compares favorably to Glendale @18.2%. We are projected to top out in FY 2024 @14.3% then drop back down to 13% in 2030 while Sacramento is projected to be @ 18%, Vallejo @ 23.7%. As newer employees with modified benefits and contributions represent a larger proportion of our workforce, the pension bite begins to abate.

There has also been a lot of attention paid to our reserves seen in CHART D, which are now greater than pre-recession levels.  We have accomplished this by balancing our Budgets, eliminating some staff positions and adding savings generated by one time payments. 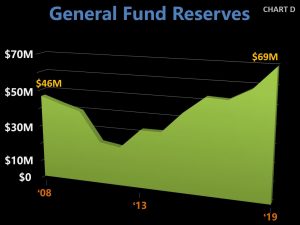 Additionally, starting in June, 2017 the City Council began funding allocated $12M to a special Trust account for future pension and other post-employment benefit obligations which now stands at $13.5M. 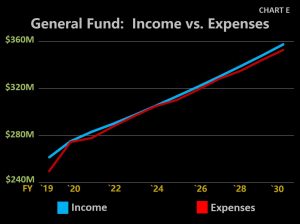 CHART E depicts a new 10 year projection of our future INCOME & EXPENSES.   While reliability is reduced the further we project into the future, I think that the longer term trend-lines are useful to examine.

The City Budget will always be under pressure from a desire to do more worthy things than we can afford to do. We have forecasted future revenues conservatively and there are several things that could have a big positive impact on our revenue. For example, additional hotels, significant tax revenue from on-line sales, and restored Federal or State funding. These could bend the revenue curve up in a meaningful way.

On the expense side, we have built the reserves to try to protect against unanticipated expenses. But we must continue to be very disciplined in how we manage our spending, or we will be confronted with the looming threat of the Operating Deficit all over again.

With all of that in mind, since it appears that over the longer term we seem to be OK, last year I asked how we should spend available funds and we need to ask ourselves this question again. 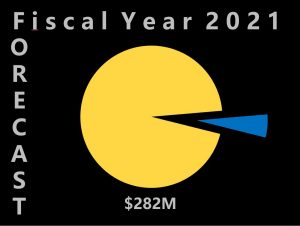 We could spend it on desirable new programs and hire additional personnel. However, if expenses grow at a faster rate than revenues, we would be building in a structural deficit.  We could put all the money in Reserves or pay down some of our $500M unfunded Pension liability. This would be the most financially conservative approach, but it ignores some pressing current requirements that shouldn’t be deferred any longer.

My proposal is a combination of building reserves and investing in capital improvements. This is the strategy that we adopted with the $11M surplus generated by Measure I this year.

We added $5M to our General Liability fund against required higher insurance deductibles; we made a $3M+ contribution to the FPRS unfunded liability and we funded a new $3.9 computer-aided dispatch system for the Police Dept. I think that is the best way to spend available dollars and I hope that the public and ultimately the City Council will agree.

Having nearly exhausted you with the required financial portion of my message, please bear with me for a few minutes of easier to absorb current events and aspirational items.

With State legislation now confirming the demise of the connection between the 710 and the 210 freeways, we can move ahead with a series of projects that will enhance transportation throughout the region and actually improve traffic flow in Pasadena.

METRO has now increased the allocation of funds to build a grade separation of the Gold Line and California Blvd to $230M. This is a big, complicated project. It will require much public discussion, careful planning, and sensitive design. But I believe that the improvements in circulation and improved access to Huntington Memorial Hospital will make the expense and short term disruption worthwhile.

Beyond immediate improvements, we can also begin to address in earnest the future of the terrible ditch inflicted on our City in anticipation of the Freeway project. This is a legacy land use planning effort with all kinds of legal, design and planning issues. But it will result in recapturing approximately 50 acres in the heart of our City for productive uses. To get a head start on what will take decades to complete, the City Manager has a assembled a staff task force to begin to define the issues. I am really excited about this effort and look forward to a broad public discussion once we have better defined the opportunity.

More than a year ago, I announced a new effort to focus attention on our city’s most valuable open space, the Arroyo Seco.

A volunteer committee worked long and hard to examine the most pressing issues confronting this wonderful resource and to develop ideas on how we might improve it. This, like the discussion of the recapture of the 710 right of way, is a long term project. However, the Arroyo Advisory Group has evolved into the non-profit One Arroyo Foundation which has begun to raise funds to implement the recommended demonstration trails project.

To support this effort, the County of Los Angeles has agreed to provide $2.5 million to the Army Corps of Engineers so that they can restart their large scale habitat restoration study for the Arroyo which could have profound long term benefits. Supervisor Barger has also committed half a million dollars in Prop. A park funding to the demonstration trails project. We are grateful to the County for all of its support to this priceless resource.

There are some other important matters to reference before closing:

Homelessness – This is the most pressing problem facing our City. While our homeless count is down 20%, there are still 300+ people sleeping on Pasadena’s streets every night and that is simply wrong. We will continue to work with our non-profit partners and the County to build additional permanent supportive housing and other facilities to drive this number down further.

Police – Our Police Chief, John Perez is in the midst of reorganizing his Department with a renewed commitment to community policing and progressive policies to minimize use of force and ensure the all of our residents can rely on equitable treatment.

Cannabis – The application and selection process is well underway for legal sales, cultivation and testing facilities per the direction of our voters. It has been complicated, controversial litigious and has devoured far more staff time than we would like, but we hope that some retail stores will be operational this year.

General Plan/Land Use – Public meetings to formulate the detailed specific plans are continuing offering new opportunities for residents to share the vision of what our city will look like over the next 20 years. Unhappily, the shortage of affordable housing has resulted in State intervention in Land Use regulations traditionally within the purview of local government. This will complicate local planning efforts and create additional controversy.

Noteworthy Development Projects  – There are dramatic changes underway on the campus of  what was formerly William Carey University in north Pasadena and will soon be EF prep school for 1,000 foreign high school students. On the other hand, Fuller’s decision to remain in Pasadena will mean less change on their campus. The new Kaiser Medical school should begin operation this year and construction continues on the largest development project in the City’s history on the Parsons campus in Old Pasadena.

100th Anniversary – Councilmember McAustin and Tournament President Farber have highlighted the impending 100th anniversary of the adoption of the 19th amendment which finally guaranteed women the right to vote. This City is engaged in a multi-year commemoration.

Local Elections – This year will mark the first time that the City will conduct its elections on the State and Federal cycle. All of us have a stake in the outcome (some of us more than others), but I urge all of you to participate.

Census – April 1, 2020 is national Census day and it is absolutely critical that every resident of Pasadena is counted. It impacts our federal funding, our representation and the future of our City. So please do what you can to get everyone to participate.

In sum, the state of our City is good and equally important, the trend line is positive.  Our residents have always been actively engaged in our decision-making, mostly in a positive and civil manner. I’m sure that this will continue as we debate the details of how to achieve our goals.  In turn, the City Council and the staff will continue to work hard to maintain the positive trend and to secure an improved quality of life for all of our residents.

I hope that this evening has been useful for you & I must thank those who helped put it together.  Special thanks to Muir High School, Principal Gray, students & faculty.  From the Office of the Mayor and City Council: Jana Stewart, Araceli Mellem and Rhonda Stone.  Pasadena Media’s Chris Miller, Bobbie Ferguson and Danny Hesse.  Finance Director Matt Hawkesworth and Public Information Officer Lisa Derderian. From the Department of Human Services:  Director Brenda Harvey-Williams, Lola Osborne, Leonardo Chavez and Dolores Mendoza, our Northwest Program Ambassadors, and of course, our City Manager Steve Mermell.