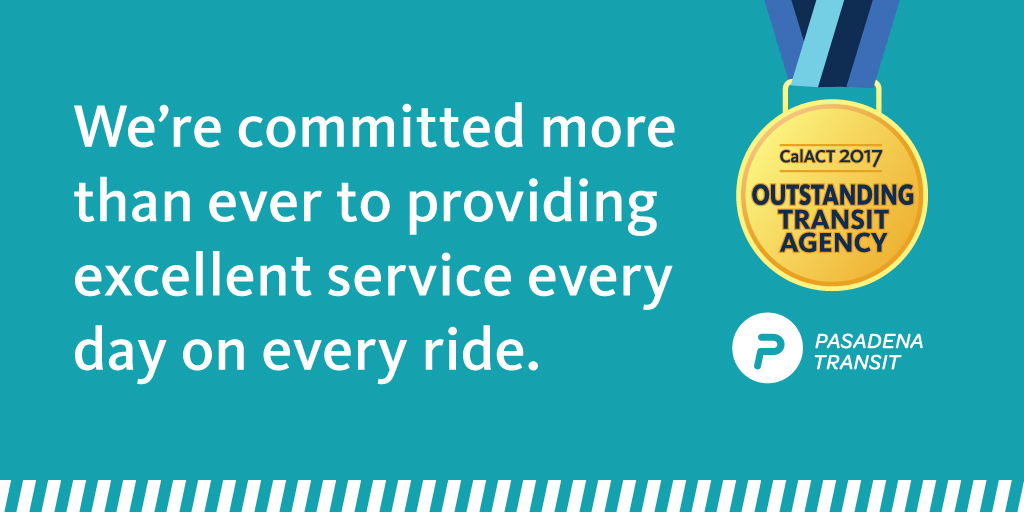 Pasadena Transit has been awarded Outstanding Transportation Agency by the California Association for Coordinated Transportation (CalACT), the largest state transit association in the country.

This statewide recognition is for Pasadena Transit’s exemplary local transit services and its steady resurgence since 2010 when it was faced with major funding shortfalls. With the support of City Council and the effort of City staff, notable achievements have been made despite significant financial challenges. These accomplishments include the replacement of the entire fleet, new technology that improves the customer experience and system reliability, rebranding of the transit system from ARTS to Pasadena Transit, extremely high on-time performance, and an annual ridership of over 1.6 million passengers!

The City of Pasadena strives to be a place where residents and visitors can travel around the city without a car.  At the forefront of this mission is Pasadena Transit.  This locally funded service is essential to support both local and regional transit connections. The success of Pasadena Transit is a direct result of its efficient and effective operations, customer service focused approach, financial management, grant awards, marketing, community relations, citywide policies that support and promote transit, and collaborative administration of its programs.