Watch this video to learn about the history of Pasadena Transit and the important role public transit has in our community. You'll also meet some of our drivers and hear why passengers love riding Pasadena's local bus service. 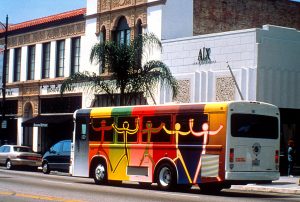 Throughout the history, you will notice a common theme of innovation. Over the years, Pasadena has had to creatively leverage limited funds to continue to expand the program. Pasadena Transit does not receive direct state or federal monies, as many operators in Los Angeles County do. Instead, the system is primarily funded by the Los Angeles County Local Return Transportation Sales Tax program including Proposition A &amp; C, Measure M and Measure R.

As a result, over the course of the past several years, Pasadena Department of Transportation staff has been very successful in securing grant awards that have provided millions of dollars in both capital and operating funds for the Pasadena Transit system. These grant funds have paid for the replacement of all Pasadena Transit vehicles since 2008, as well as additional service on Routes 20 and 31/32 and the revival of its Sunday service in July 2018.

June 1994:  In time for the 1994 World Cup, which was hosted at the Rose Bowl, Pasadena Transit began as Pasadena Area Rapid Transit System (ARTS for short). The system consisted of one route, the Downtown Route, that connected Old Pasadena, the Civic Center, the Playhouse District and the South Lake Business District. Riding the ARTS was free until a fare was introduced on July 1, 2003.

The fleet consisted of 6 uniquely wrapped buses including the Visual Arts bus, the Symphony bus, the New Year’s Day bus, the Historical Landmarks bus and the Multicultural bus. Pasadena ARTS buses were “Art that really moves you.” 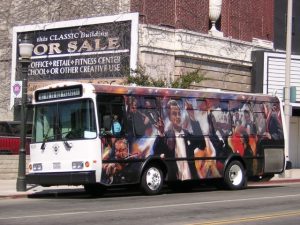 March 2002: In anticipation of the opening of the Metro Gold Line in 2003, a major goal of the City was to expand and restructure the Pasadena ARTS service so that each of the light rail stations would be served by the City’s local transit system. The Uptown and Downtown routes were split into four routes in order to serve the Gold Line stations once they opened. The Downtown Route was restructured to serve Pasadena City College and was renamed the Route 10. The Uptown Route was split up into Route 20, Route 31/32 and Route 40.

June 2003: Pasadena ARTS was again expanded to add two routes, the Route 51/52 and the Route 60 to provide connections to the Rose Bowl, ArtCenter College of Design, Jet Propulsion Laboratory (JPL), Hastings Ranch, among other locations.

July 2003: A fare structure was introduced to coincide with the opening of the Gold Line. The establishment of a base fare enabled the City to create a system to allow riders from Pasadena ARTS to transfer onto either a Metro or Foothill Transit bus or the Gold Line for an extra $0.25. Two basic fare categories were established: a base fare of $0.50 and a youth/senior/disabled fare of $0.25. Pasadena ARTS also began participating in the EZ Pass program, a monthly pass good for travel across various agencies across the region.

2006: ARTS was rebranded from the six individual buses to a new look that combined the six unique looks into one look for the entire system. At this time, all bus stop signs, schedules and schedule panels were also redesigned. The classic ARTS look stayed in place until 2015.

Spring 2007: Schedule adjustments were made to the Pasadena ARTS Route 31/32 and minor schedule changes were made to the Route 51/52 to provide better bus connections for Art Center students. The Route 70 was modified to provide service to Old Pasadena from the South Orange Grove and Avenue 64 areas. 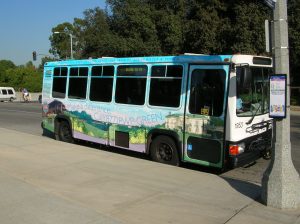 2009: Route 70 was discontinued due to extremely low ridership.

2010: Pasadena ARTS was forced to implement service cuts, including eliminating Sunday service, to address funding shortfalls due to the economic recession. In addition, aging vehicles had made the service unreliable and on time performance was in the low 80%’s. This crucial local transit service was struggling operationally due to a severe reduction in revenue, and had few funding opportunities to address the pressing operational and capital needs that were threatening the sustainability of the system.

July 2013: A route modification was made to Route 10 resulting in both westbound and eastbound travel along Colorado Blvd. in the Central District, as well as significantly increased frequency on the popular and heavily used Route 20 (this increase is provided for three years through a federal grant).

By 2013: With the support of City Council, and through interdepartmental and interagency collaboration, Pasadena ARTS was able to replace its entire fleet of aging vehicles and implemented other capital and operational improvements which led to a resurgence of the service.

Fall 2014: Pasadena ARTS begins accepting Transit Access Pass (TAP), the regional fare payment method which is accepted across Los Angeles County for 25 participating transit systems. This allows passengers to pay for their rides by storing value on the card and simply tapping it on the validator when boarding the bus. 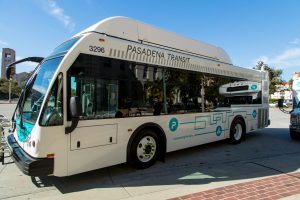 2013-2015: Pasadena was awarded several grants including an extension of the funding for Route 20 granted in 2013 and additional funding for Route 31/32 (this increase is grant funded through 2020) to significantly increase frequency.

December 2015: The Pasadena ARTS was rebranded to Pasadena Transit. This rebranding was the result of a multi-year process and collaboration with the ArtCenter College of Design. The final brand consists of a simple circular logo supported by the tagline “Connecting the Dots.”

Spring 2016: Simultaneously with the unveiling of its new brand, Pasadena Transit launched its real-time arrival information system allowing passengers to track their bus arrival in real-time via a variety of smart phone and web applications and with BusFinders. BusFinders are solar-powered, rugged interactive devices that are affixed to bus stop posts to provide the predicted real-time arrival of buses with just the push of a button.

Spring 2017: Pasadena Transit was awarded the Outstanding Transportation Agency award by the California Association for Coordinated Transportation (CalACT), the largest state transit association in the country. This statewide recognition is for Pasadena Transit’s exemplary local transit services and its steady resurgence since 2010 when it was faced with major funding shortfalls. 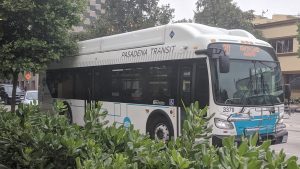 December 2018: Added two (2) 35 foot New Flyer buses to the fleet. The New Flyers are slightly larger than the rest of the fleet, and run primarily on the Route 20 to assist in relieving overcrowding.

June 2019: Pasadena Transit celebrates 25 years of service to residents of the City of Pasadena and beyond!