Pasadena City College’s (PCC) Hutto-Patterson Gymnasium is new home for the Millard Sheets Mural, Tournament of Roses, 1890. The recently installed piece was gifted to the City of Pasadena and dedicated in May 2014 by Pasadena Mayor Bill Bogaard who thanked PCC for housing the 75 ft. mural.

In 2011, the mural was removed from display inside a local bank building on Colorado Boulevard. The mural was conserved by the artist’s son, Tony Sheets, through the City of Pasadena Arts and Culture Commission.

For Pasadena, Sheets painted a mural of the first Tournament of Roses Parade for the former bank branch on Colorado Boulevard. After years of display inside the bank building, the mural was conserved for future generations through a partnership with Pasadena City College. On January 23, 2014, Tournament of Roses, 1890 was installed in honor of the Mayor’s 2014 State of the City Address and the Grand Opening for PCC’s new Center for the Arts.

The impressive mural, which dates from 1963, consists of 20 oil painted panels on walnut veneer that reveal an historical narrative of the first Tournament of Rose Parade in Pasadena. Containing unique, Pasadena-specific content, the artwork also showcases the style and technique of its artist, Millard Sheets. The installation depicts the earliest days of the Parade in Pasadena and features images of participants in late 19th century attire in horse-drawn carriages and on horseback as they proceed along a backdrop of iconic Pasadena landmarks including City Hall, parade floats, and marching bands.

The partnership between the City of Pasadena and Pasadena City College ensures public accessibility and prominence of this remarkable cultural heritage icon and provides maintenance of the artwork in a secure environment. 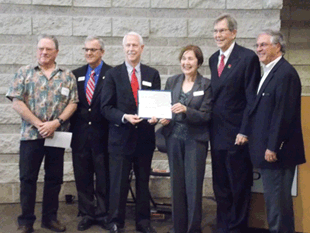 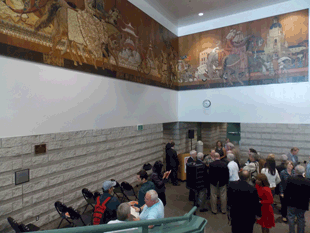