Pasadena is generally attributed as the birthplace of the bungalow court, a form of multi-family housing that involved groupings of small one-story individual houses or duplexes oriented around a common landscaped courtyard, usually on one property. Developed from 1909 through 1942, bungalow courts evolved from transient, seasonal use to permanent residences and appeared in many architectural styles. Having a wide variety of character and appearance, the city’s inventory of bungalow courts is significant as a regional type of low-density multi-family housing that combined the individual privacy of a single residence with shared community space.

The city’s first bungalow court was St. Francis Court (photo above), designed by Sylvanus Marston and built in 1909. This court, on the north side of East Colorado Boulevard at the current intersection of North Oak Knoll Avenue, was made up of 11 bungalows, each with its own garden and with a driveway through the center. The bungalows had between one and three bedrooms, modern conveniences, and high- quality detailing common in the Arts and Crafts period. An Arroyo stone and brick gateway was at the entrance (the court was disassembled and partially relocated to make way for the extension of Oak Knoll north to Union Street). Although the original configuration of St. Francis Court has been lost, five of the original bungalows survive as a grouping on individual lots at the corner of South Catalina Avenue and Cornell Road. Interestingly, in his book American Bungalow Style, architectural historian Robert Winter notes that Charles Sumner Greene, of the acclaimed architectural firm of Greene & Greene, said of the bungalow court, “This is a good example of what not to do.” It was his opinion that courts had “no other reason for being than that of making money for the investor.” 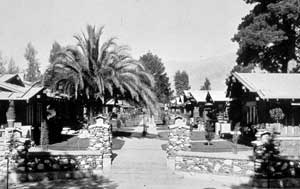 In Pasadena, the oldest bungalow court retaining its original configuration and location is Bowen Court (above) at 539 East Villa Street. Gartz Court (above), at 745 North Pasadena Avenue (top right), is one year older but is not in its original location. Bowen Court was built in 1911 and designed by Arthur & Alfred Heineman, who in 1925, developed the bungalow court concept into the first “mo-tel,” the Milestone Mo-tel in San Luis Obispo. The Heinemans also designed a number of large houses in the city including the Freeman House at 1330 Hillcrest Avenue. Bowen Court is the city’s largest bungalow court with 23 buildings, including a mix of single units and duplexes, on a one-and-one half acre site. The court features a rustic building, once called the “tea room,” with a thatched roof (since replaced) and log railings (some of which still exist). Today, the court’s mature landscaping creates a rustic wooded oasis in the middle of an eclectic neighborhood of single- and multi-family houses.

Bungalow courts continued to be developed until World War II, after which denser garden apartments, two-story connected buildings oriented around a courtyard first developed in the late-1920’s, became more prevalent (see photos of two prominent examples above). The period of a bungalow court’s construction is usually detected by the architectural style of the individual bungalows. Early courts, such as those pictured above, were designed in the Craftsman style; courts built in the 1920’s and early 1930’s were mostly in period-revival styles such as Spanish Colonial Revival, Mission Revival, Colonial Revival, Tudor Revival or English Cottage Revival; and courts built in the late 1930’s and early 1940’s were generally in the Minimal Traditional style. There is even one court, at 754 S. Marengo Avenue, in the Art Deco style. Some examples are shown to the right. 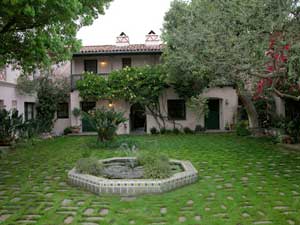 As a testament to the importance of the bungalow court, and later courtyard apartments, to the city’s urban form, the City Council has adopted requirements that all new multi-family residential projects outside of the downtown area be oriented around a landscaped courtyard.

To view bungalow court listings in the city’s historical resources database, click here to open our database of historic properties. Then, under the “Search by Property” heading, select “Bungalow Courts” from the pull-down menu in the “context” field and click “Search Property.” The database will list properties identified as bungalow courts; click a listing to open the record and click the “maps and photos” link within the record to view larger photos of each property. The largest concentration of bungalow courts in the city is on South Marengo Avenue between East California Boulevard and Glenarm Street. There are nine courts in this area at the following addresses: