The project site is bounded by Marengo Avenue to the west, Holly Street to the north, Garfield Avenue to the east, and Union Street to the south. Current uses on the project site include the existing vacant YWCA building located on northeast corner of Marengo Avenue and Union Street; a surface parking lot east of the existing YWCA building; and landscaping and public art (Robinson Memorial) along Holly Street and Garfield Avenue. The project site comprises approximately 84,042 square feet of land that would be developed into a single boutique hotel and surrounding grounds. The Robinson Memorial would remain in place and be unaffected by the project. 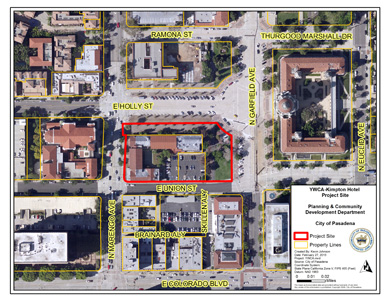