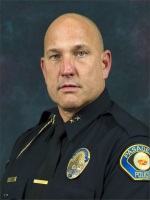 Art Chute has been with the Pasadena Police Department for 25 years. Art began his law enforcement career as a Police Officer in 1994. He has worked a variety of assignments throughout his career, including Patrol, Vice/Narcotics, Detectives and the Training Unit.

In 2003, Art was promoted to Police Corporal and was assigned to the Administrative Services Section.

He was promoted to Police Sergeant in 2005. He worked in the Event Planning Section, planning such events as the Rose Parade, the Rose Bowl Game, international soccer matches, UCLA football games, and Rose Bowl concerts. As an officer, corporal and sergeant, Art worked in the Special Enforcement Section specializing in street gangs, street level narcotics and the SWAT Team.

In 2014, Art was promoted to Police Lieutenant, returning to Patrol then transferring to the Administrative Services Division, managing the Event Planning Section and Counter Terrorism Unit. Art was instrumental in developing strategies to enhance security at the Rose Parade, such as adding urban patrol rifles to the parade route and closing Colorado Boulevard on New Year’s Eve in order to keep businesses and spectators safe from vehicle incursions.

In August of this year, Art was promoted to Acting Police Commander and is responsible for commanding the Field Operations Division, which includes Patrol and Community Services. He also commands the Event Planning Section and Counter Terrorism Unit. He manages over 150 employees.

Art holds a Bachelor’s degree in Criminal Justice Management and is a graduate of the Sherman Block Supervisory Leadership Institute.