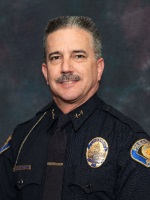 Commander Mark Goodman was born and raised in the San Gabriel Valley. Mark joined the Pasadena Police Department as a Police Officer in 1994 after earning a Bachelor of Science degree in Criminal Justice from California State University Los Angeles. Mark has been assigned to a variety of units in the Police Department including Patrol, Detectives and the Special Enforcement Section (S.E.S).

After being promoted to the rank of Sergeant, Mark was assigned to the Traffic Section and subsequently to the Air Operations Section where he developed and implemented a department policy to effectively manage vehicle pursuits using a risk management model based on the use of air support. This policy became a model policy adopted on a regional basis by other police departments. Mark also developed and implemented an enhanced personnel evaluation system currently used for all sworn and non-management personnel at the Police Department.

While assigned to the Air Operations Section, Mark was involved in the leading and management of the Foothill Air Support Team (FAST). This regional air support asset is one of the largest and well-known air support units in the state of California.

Mark was promoted to Lieutenant and assigned back to Field Operations Division – Patrol. He was assigned as the administrator for the Police Department’s Homeless Outreach and Psychological Evaluation (HOPE) Team. This team deals exclusively with interacting with individuals suffering mental health emergencies. This team is on the cutting edge of the police/clinician response model, and serves as a national model followed by other police agencies.

Upon his appointment to Acting Police Commander in February of 2020, Mark was selected to lead the Department’s Special Operations Division. This division includes Air Operations, Traffic, Community Relations, and the city jail.

Mark holds a Master of Arts degree in Organizational Leadership, and is a graduate of the Sherman Block Supervisory Leadership Institute.

Mark enjoys engaging with the community, solving problems, and working with neighborhood groups throughout the City. He is a member of the Pasadena Host Lions Club and serves as a board member for the California State University Los Angeles Alumni Association.

Mark is married and has three daughters.