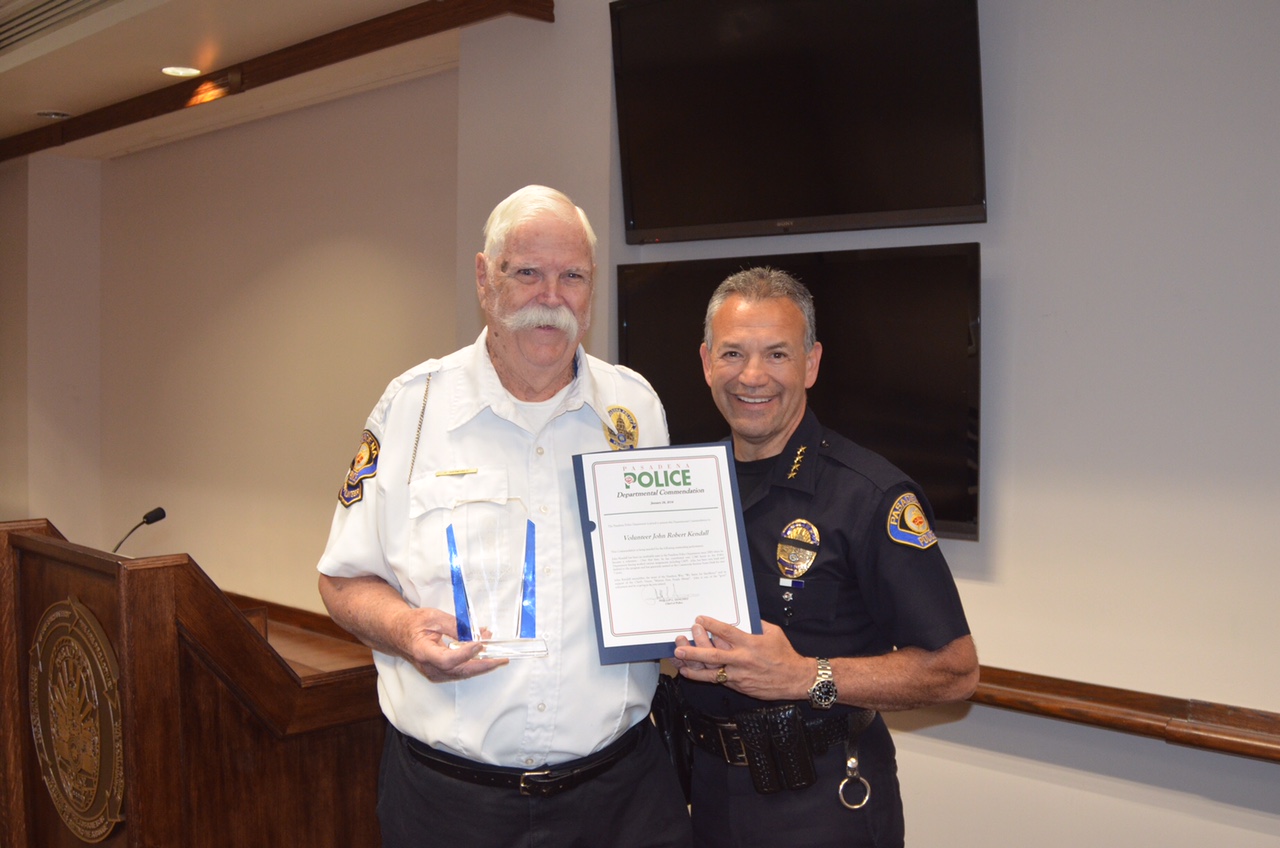 John Robert Kendall died peacefully and surrounded by family on Friday, June 5, 2015. He was 87 years old. John was a long-time Pasadena Police Department volunteer with the Citizens Assisting Police Program. John wanted to join the police department after completing his naval service in the early 1950s, but after slowly moving up the eligibility list, he focused instead on supporting his family through other work. He kept close connections to the Pasadena Police Department through his constant companion, his police radio scanner.

When his daughter, Shar Stafford, joined the CAPP program, she encouraged him to participate and he became a volunteer in 2005. John was a fixture at weekly Citizen Police Academy classes, serving food (and enjoying some of it too!) and encouraging others to join the volunteer program. For several years he had a full time schedule as he patrolled twice per week with his partner Tom Pico, as they wrote handicap violation tickets, and even helped facilitate the arrest of a suspect involved in a car burglary. John spent the remaining three days at the front desk, ready to greet citizens with a cheerful smile. The officers and department staff also looked forward to the pan dulce and donuts that he’d bring each week. John helped at the mobile command post for every UCLA game at the Rose Bowl, and enjoyed chatting with the public and fostering positive connections between the community and the police. He took pride in serving any request made of him, from 5:00am calls to set up officer driving tests to volunteer call-outs day or night. During the holiday season, John was the resident Santa Claus, donning the big red suit and hearing wishes of local kids in the department lobby, and then traveling the city delivering gifts to children and families in need. As his health issues progressed and he was unable to go on patrol, he continued his service at the Community Curbside Chats, talking with citizens and staffing the mobile command post.

John was a dedicated volunteer for 10 years, and in that time logged over 7500 hours. He received a departmental commendation in 2014 and the Casey Jones Volunteer Service Award in (2008). His legacy of citizenship will live on as his family continues to be of service to the department; John’s daughters Shar and Laura Kendall, and granddaughter Kristin Vigil are CAPP volunteers, and his grandson Justin Kendall is a general volunteer.

John’s spirit of service and dedication to the department is unmatched; he touched the lives of each person who had the pleasure of meeting and working with him. The love and appreciation for John and his family was evident in the visits from Chief Sanchez and the nearly 90 officers and department staff who visited John’s bedside. He will be missed beyond measure.

Man in Critical Condition after Stabbing

All Fireworks are Illegal in Pasadena