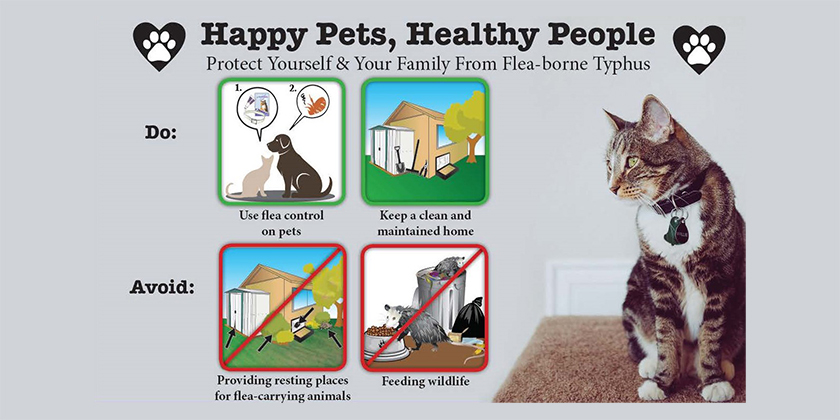 The Pasadena Public Health Department (PPHD) is reporting epidemic levels of typhus fever this year. Typhus fever is a disease spread to humans by infected fleas. In 2018, 20 Pasadena residents have been confirmed to have typhus fever, well above the expected one to five cases per year.

Flea-borne typhus, also known as murine or endemic typhus, is a disease carried by fleas infected with bacteria (Rickettsia typhi or Rickettsia felis). Flea-borne typhus is found regularly in Los Angeles County, especially Pasadena, with most cases occurring in the summer and fall months.

Locally, the primary animals known to carry infected fleas include feral cats and opossums. People with significant exposure to these animals are at risk of acquiring flea-borne typhus. Pet dogs and cats that are allowed outside are more likely to come in contact with infected fleas and could spread the disease to humans. Although pets and animals do not get sick from typhus, the disease can cause high fever, chills, headache and rash in people. Typhus can be treated with antibiotics.

“Typhus fever is a disease that can cause serious complications requiring lengthy hospitalization, and rarely, death,” said Dr. Ying-Ying Goh, Pasadena Health Officer. “All residents should to take steps to prevent fleas in and around the home.”

There are simple precautions to prevent the spread of typhus fever disease:

Local healthcare providers are required to report any Pasadena residents with a suspected or confirmed typhus diagnosis within one working day to PPHD at (626) 744-6089 Monday to Friday 8 AM-5 PM, or (626) 744-6043 after hours. Diagnosis requires a high degree of clinical suspicion since flea-borne typhus typically presents as a non-specific febrile illness and early diagnostic tests are unreliable.

scroll down for more

Get Vaccinated When It's Your Turn

Tips for a COVID-Free Halloween

COVID-19 in the Workplace

Pasadena COVID-19 InformationRegister for COVID-19 TestingReturn to Work FormWhat to Do If You're SickFace Coverings FAQsCA Department of Public Health UpdatesCOVID-19 Frequently Asked QuestionsHow to Protect Seniors and Other Higher-Risk AdultsGuidance for Individuals with Access and Functional NeedsUnderstanding Quarantine, Isolation and Self-MonitoringHow to Talk to Children About COVID-19