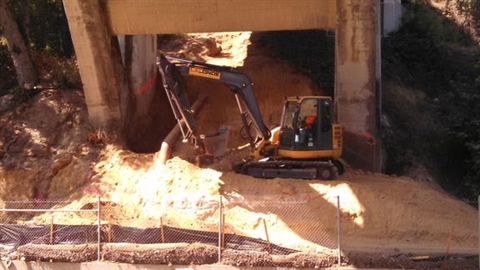 Traffic has been detoured to other bridges across the Arroyo Seco.  Motorists are able to cross using the Colorado Boulevard Bridge to access areas north of La Loma Bridge, and are able to use the San Rafael Bridge to access areas south of La Loma Bridge.  The Department of Public Works has created a traffic management plan to assist the flow of traffic featured on the subsequent page.

The contractor mobilized in July 2015 and the bridge was closed on Monday, July 27, 2015.  The asphalt concrete has been removed from the bridge deck and the east side trail cover is under construction.  A majority of the work is occurring below the bridge.  A pedestrian cover and support foundations for the “falsework” that will be constructed are underway.  Preparations to construct a temporary bridge to transport heavy equipment to the west side of the channel are also underway. It is anticipated that La Loma Bridge will re-open in December 2016.