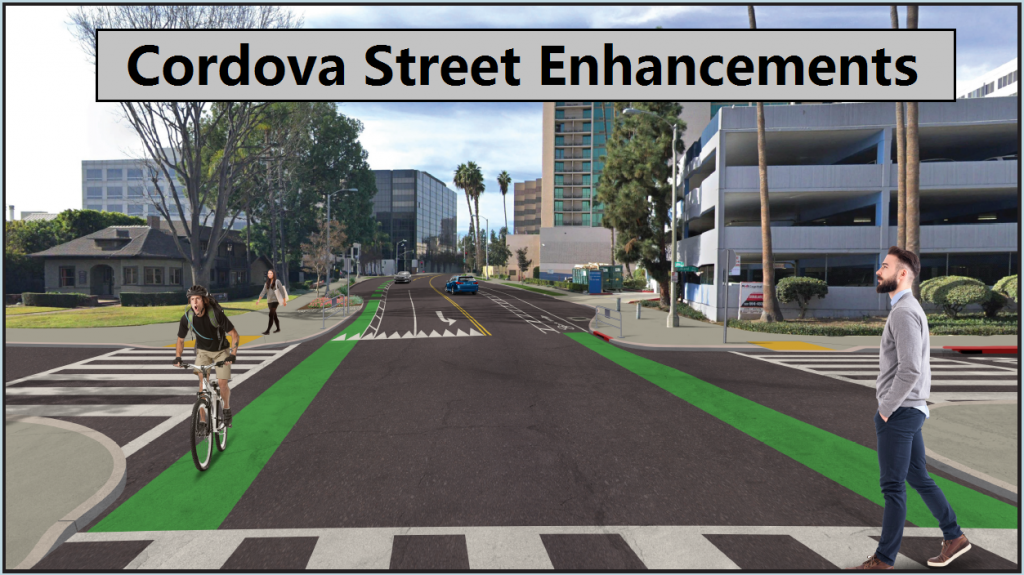 The project advances the City of Pasadena’s Mobility Element objectives that “Streets should reflect neighborhood character and accommodate all users; streets should accommodate all users such as pedestrians, bicyclists, public transit, skateboarders and scooters; Streets should reflect individual neighborhood character and needs, and support healthy activities such as walking and bicycling; and design streets to achieve safe interaction for all modes of travel particularly for pedestrians and bicycle users.”

Pasadena will be a city where people can circulate without cars:

Change will be harmonized to preserve Pasadena’s historic character and environment:

How is this project funded?

Please see below a breakdown of funds for this project:

Do proposed bike lanes connect to the Metro L Line?

The proposed project will take cyclists to Arroyo Parkway, approximately 250 feet north of the Del Mar station entrance. Bicyclists are encouraged to either walk their bikes to the station using the sidewalk, or safely share the road while cycling to the station

Why haven’t dedicated and protected bike lane been considered for this project?

If Cordova street is so quiet already, why do we need a bike lane? Seems like a bike lane is more necessary on a street with higher speeds and vehicle trips.

The intent of the project is to manage speeds on Cordova Street, provide bike connectivity, and to enhance pedestrian safety crossings at unsignalized intersections. Cordova Street traffic volumes are well below volume capacities of a four-lane roadway which can lead to speeding by motorists. Reallocating excess roadway capacity to better fit vehicular demand is an industry-standard strategy to managing speeds and improving pedestrian safety.

Will residents of the City be impacted by this project?

Based on our findings, the project is not expected to negatively impact nearby residents. The adopted Mobility Element forecasts traffic volumes for the year 2035 assuming full build-out of the adopted General Plan Land-Use Element. In the adopted Mobility Element, Cordova Street is assumed to have two lanes of traffic with bike lanes and carry an estimated range of 9,000 to 16,000 daily cars on different segments by 2035.

For bicyclists, a safer calmer street with bike lanes is preferred over streets with higher volumes and no bike lanes albeit a longer route.

How will this project affect traffic flow and congestion in the vicinity of the project? Will the reduced lanes on Cordova push travelers to Del Mar?

The lane reductions to the west of Lake will not impact Cordova’s ability to carry the existing 11,000 daily trips. Even with the roadway space reallocation, vehicle travel lane capacity will still be able to handle higher volumes. Consequently, drivers are not expected to divert their trip to Del Mar.

How will the City address the needs of visually impaired and persons with limited mobility?

The project will be installing 20 curb extensions with 38 ADA curb ramps along with 45 crosswalks. Additionally, 44 new APS (accessible pedestrians signal) for visually impaired will be installed.

Forecasted volumes are estimated at full build-out of the General Plan adopted Land use Element with the proposed two lanes of traffic and bike lanes. Furthermore, despite new developments in the area, the increase in traffic volumes in the past 9 years have been non-existent and/or negligible. Cordova has the capacity to handle the forecasted volumes should they rise.

The forecasted reduction in volumes on Del Mar are based on full build-out of non-vehicular infrastructure such as bike lanes, better pedestrian environment; and increase in transit ridership by improving transit amenities, and shortening transit headways (shorter wait for the next bus).

What were the daily vehicle volumes on Cordova Street before and after the road reconfiguration that added a bike lane east of Lake Avenue in 2011?

Since 2009, the traffic volumes have not significantly increased or decreased:

How will cyclist get a green light at signalized intersections? What kind of Bicycle detection technology will be used?

The project will include bicycle detections at signalized intersections to detect cyclist on the road and change the signal timing as needed. The technology used is a newer approach compared to traditional traffic loops that may not detect bicycles at all time. This new technology detects the cyclist by using a camera to sense the cyclist in the intersection.

Will this project include signage along Cordova Street to direct people to the Del Mar Metro station?

This is not part of the scope of this project, however, it will be looked into as a future project.

Will this project look into possibility of a wider sidewalks with better lighting and trees for shade?

This is not part of the scope of this project, however, it may be considered as a future project.