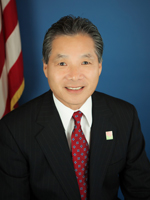 Gene Masuda was elected to the Pasadena City Council in April, 2011 to represent East Pasadena.  From 2015 to 2017, he served as Vice-Mayor and currently serves on the Legislative Policy Committee and represents the City of Pasadena on the Gold Line Construction Authority and the Gold Line Joint Powers Authority.

Gene is dedicated to maintaining the City’s fiscal discipline while protecting police and fire services.  As a longtime neighborhood and quality of life advocate, Gene has a record of working to fight overdevelopment and traffic in order to maintain the character and beauty of residential neighborhoods.  Gene is a leader in Pasadena’s open space movement, dedicated to preserving and protecting Pasadena’s natural open space by successfully having fought to keep the Edison right-of-way from being developed into storage units.  Along with the Pasadena Police, he has also led the effort to combat crime in East Pasadena.

Gene was a former board member of the Pasadena Educational Foundation which raises millions of dollars, provides enrichment programs, teacher grants and field trips for the PUSD, where his own son was educated. He continues to support PEF and the Boys and Girls Club that provides after school homework help, character building experiences and recreational activities.  His advocacy for quality education is driven by the desire to provide a solid foundation for the youth of Pasadena who are the hope and future of our community.

Gene is a retired business owner and former president of an East Pasadena neighborhood association.  He graduated from California State University, Los Angeles with a Bachelor of Science in Business Administration.  Gene has a son, a married daughter and three grandchildren.  He and his wife Joanne, a retired public school teacher, have lived in Pasadena for 35 years.