ESPN Radio "On the Road" Live in Front of Pasadena at City Hall Jan. 6, 2014 Prior to BCS National Championship Game, with College GameDay, The Herd and SVP & Russillo Shows--Public Invited to Attend for FREE 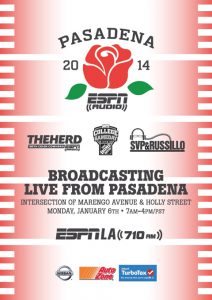 The Public is invited to be part of the special live audience--for FREE--to listen and watch EPSN radio and TV shows as they broadcast live from Pasadena City Hall on Game Day prior to the BCS National Championship Game Jan. 6 between the Number 1 Florida State and Number 2 Auburn at the Rose Bowl Stadium.

The three shows will air beginning at 7 a.m. and will air live in front of City Hall until 4 p.m.  Best of all, the public can come down to City Hall and be part of the live audience action! It's a great way for locals who are not going to the game to be part of the BCS excitement.  Or, for those going to the game, stop by before heading down to the stadium. Remember, it's free!

All three shows will be based near City Hall, 100 N. Garfield, down near the Holly Street intersection with Marengo Avenue.

Did we mention it's free?

There will be nine consecutive hours of live talk, interviews and analysis on Jan. 6 leading up to the championship game.  The Herd with Colin Cowherd will kick off the on-site programs at 7 a.m. PT, followed by SVP & Russillo(Scott Van Pelt and Ryen Russillo) at 10 a.m. and a special three-hour ESPN Radio College GameDay: BCS Special at 1 p.m.  Russillo, Trevor Matich and Brad Edwards will host.